Every January, the University of Mississippi issues tax-related documents to students and employees so they can prepare their personal tax return.  W-2’s were discussed earlier in a November 2012 TECHNews article.  Two other forms issued are Form 1098-T and Form 1042-S. 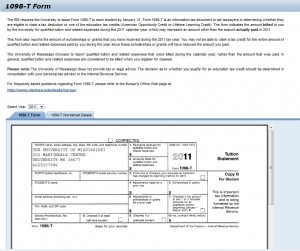 Form 1098-T, a tuition statement, lists all qualified tuition and related expenses billed, as well as any scholarships or grants disbursed to students during the prior calendar year.  The form aids taxpayers in determining if they are eligible to claim a tax deduction or an educational tax credit.  It is important to note that amounts are reported in the year in which the expense or aid was posted to the student’s bursar account.  It is not uncommon for Winter Intersession or Spring tuition, grants, and scholarships to appear on the previous year’s Form 1098-T, since those amounts could have been posted to the student’s account in the November or December prior to the term beginning in January.  Form 1098-T is mailed to students during the month of January.  Once the forms have been printed and mailed, they are also made available within myOleMiss: Choose the Student tab => Financials on the left under “Detailed Navigation” => 1098T.  For more information and answers to common questions, please see the Office of the Bursar’s 1098-T webpage. 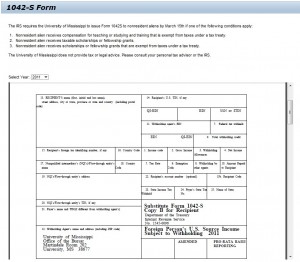 Form 1042-S reports amounts paid to foreign persons that are subject to tax withholding.  It lists the amount of tax withheld from payments to international students or employees during the previous calendar year, or if tax withholding did not occur due to a tax treaty.  These forms are mailed to students and employees before March 15.  Once the forms have been printed and mailed, they are also made available within myOleMiss: Choose the Employee tab => 1042S on the left under “Detailed Navigation”.  They can also be found within myOleMiss by choosing the Student tab => Financials on the left under “Detailed Navigation” => 1042S.  For more information regarding Form 1042-S, please contact the Office of the Bursar.