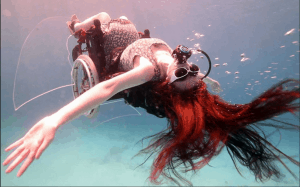 If you’ve never seen a woman SCUBA dive in her wheelchair, the time is nigh.  A British artist named Sue Austin designed and developed her Underwater Wheelchair for the 2012 Cultural Olympiad that ran alongside the 2012 Summer Olympics in the United Kingdom.  Sue received a commission to create a series of installations and events for the Olympiad, and her finished product did not disappoint.  In fact, four years later she is still traveling the world demonstrating and speaking about her machine.

Sue’s mission is “to challenge the idea of disabled as ‘other’ and represent her experience as a wheelchair user in a brighter way.”  She has used a wheelchair since 1996 and then trained as a disabled SCUBA diver in 2005.  She realized then that the fin gloves and SCUBA gear served the same function as her electric wheelchair—they extend her range of activity in the world.  From that realization she considered whether it was possible to bring those two ideas together.

The eventual result is the wheelchair you see pictured and in this video of her TED Talk—a device that is both a tool and an artistic expression.  As a piece of art, the wheelchair is an interesting juxtaposition of two pieces of assistive technology that one rarely if ever considers side by side.  Once you see it in action, however, the allure is unmistakable.  I want one.  And I bet you do, too. 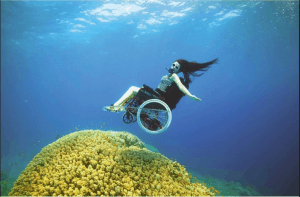 This machine has captivating powers.  It is a new piece of technology that allows someone to travel and perform physical tasks they otherwise couldn’t.  Unlike most assistive technology, using this wheelchair also functions as an effective artistic performance when you see it live or have the experience relayed through pictures and video.  Watching her use her machine has a poetic fluidity that is undeniable.  And she certainly reached her creative goal of artistic juxtaposition.  The result is an artistic ‘performance’ that can inspire a feeling of awe that one rarely gets when you witness someone use either of the two main elements in isolation.