If you log into your website and see a warning you that your storage space is almost full, there are generally two culprits: large resolution images and bloated PDFs. I’ve written articles about decreasing the space taken up by images in the past. In this one, I’m going to tackle doing the same for PDFs.

How Do PDFs Get So Big?

The PDF is more than three times the size of the Word document! These are tiny file size compared to real life files found in the wild. Note that if I had included an image in my Word doc, the PDF would have increased by at least that much, also. But for simplicity, I opted not to use an image for this example. 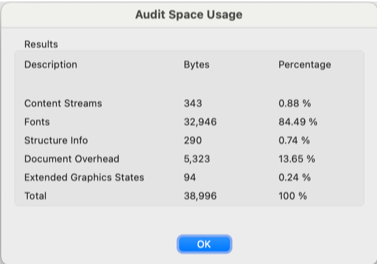 Open the PDF in Adobe Acrobat. You can see where all those extra bytes are coming from by going to File > Save As Other > Optimized PDF, and then clicking the Audit Space Usage button. It shows the types of data stored with the file, along with the space used by each.

It appears that about 85% of the space is taken up by the default font that from Word. But I hear you asking, why does it include a font library in a basic document? The point of PDFs is to appear exactly the same on any computer. So if a computer had the file but didn’t have the right font library, that font is also embedded right there in the file if you need it.

The trouble is, it usually doesn’t matter what font was used. As long as it ends up in something close to what was intended, that is good enough. Images will also expand the size of PDFs, especially if time isn’t taken to optimize them before they are added.

Acrobat Pro – If you have Adobe Acrobat Pro, this is a simple, one-step fix. Open your PDF in Acrobat Pro and then select File > Save As Other > Reduced Size PDF. (Change the filename if you want to preserve the original file.) 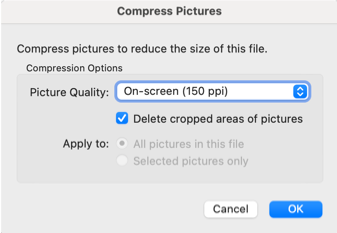 If you are in the process of creating a Word document that you plan to turn into a PDF later, you can take a first step by reducing the size of the Word file. Go to File > Reduce File Size and reduce the picture quality to On-screen (150 ppi). Then, when you save the document as a PDF, make sure you select the option “Best for electronic distribution…”.

By following either/both of these paths, you should now be in great shape. But wait, there’s one more thing.

When simple marked-up text goes on a webpage for viewing, screen readers usually don’t have any problems conveying their meaning. But by encoding text as a PDF, you sometimes have to go an extra step or two in order to make sure that it can be interpreted correctly for screen reader users. UM’s Digital Accessibility Solutions group has helpful guides and checklists to help you ensure that your PDFs will be accessible to all.

Now that you have an optimized and fully accessible PDF on your website, anyone who wants to read it should be able to download and open it easily. But just because you can create PDFs like a professional doesn’t mean that you ought to.

What are PDFs for, really? The Portable Document Format was created back in the days when you couldn’t run the same programs on both Mac and Windows machines. Adobe’s PDF standard was created so that a person using one operating system could create a document, including text and images, and give it to a person on another operating system to view and print just as it was originally laid out. This technology comes to us from 1991, back when computers were often hooked together in offices in order to share files.

This was was more than 30 years ago — back when the Internet still had that new car smell because almost no one was using it. This was long before the Web was popular, and certainly before anyone thought of surfing it using phones and tablets! And yet PDFs are still with us, even though they can’t be made responsive to different device screen sizes. They are locked into the layout they had when they were created. All you can do is use pinch or zoom gestures to try and read them. Nobody likes having to do all that just to read something.

So why would we still be using PDFs in 2022? I can think of two reasons, though there may be others.

A PDF’s lack of responsiveness is actually a strength in some situations. It makes sense to create a PDF when you want to preserve the actual layout of a document. Flyers, presentations, and ebooks still work very well as PDFs, because no one expects them to function like web pages. Flyers, in particular, are great as PDFs because they are usually printed out and posted in places where a computer screen isn’t practical.

The only other reason I can think of to create a PDF is because it has become a habit. It sometimes takes us a while to change our workflows from print/paper-based output to the digital environment.

I once worked as a temp employee in a call center for a digital communications company. My first responsibility was to make copies of procedural changes and put one in each of the customer service rep’s file folders. Large filing cabinets were located centrally on each floor of the building. Even though the company was in the business of creating email accounts, and it gave email addresses to all of their employees, the administration still required these paper copies to be in each person’s folder so they could see it on their next shift and place it in their own binders for reference. By the look of some employees overstuffed folders, they had apparently never gotten those memos. The company’s workflow hadn’t kept pace with the very technology they were actually selling.

As with most things that will be posted on the web, be thoughtful about using PDFs. Avoid them if you can. But if you have to make one, be sure to optimize it before you offering it to your visitors. It’s just good manners!