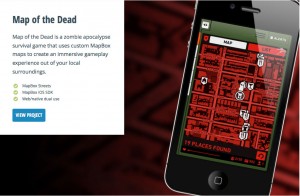 Map of the Dead: One of many apps created using MapBox

MapBox makes creating custom maps a breeze. From the website you can easily create a map that can be embedded in a webpage, but that is just the beginning. There are endless possibilities of what you can do with the MapBox tool.

Anyone can use MapBox. After creating an account, you can begin creating your own maps of anything. Create a map of directions to your house for out of town guests, a map of important locations around your town, or a map of attractions and locations you want to visit on your next vacation. When your map is finished, MapBox provides you with instructions to share the map via email or to embed it in your website as either a static image or a fully interactive map.

MapBox is also useful for developers. It provides many resources for integrating their maps into your ideas including a Javascript library, iOS Mobile SDK, and a REST API  for use in any number of programming languages.

This application pulls data from twitter through GNIP, which allows users to gather various information from a number of social networks. The applications determines location (from people who have geolocation enabled on twitter)and device type (iOS, Android, Blackberry, or Other) from the GNIP API and then plots the information on a world map provided by MapBox. (The MapBox API and Libraries give you the ability to create markers for locations, such as the lighted dots used to plot tweets.) You can turn off/on the various devices by clicking on the corresponding name.

Want to find out more?

MapBox provides documentation for developers on their websites. There are many other examples floating about the interwebs that you can check out, including a simple jsFiddle that shows the location of Powers Hall on the Ole Miss campus. (Here is also the result of the jsFiddle.)