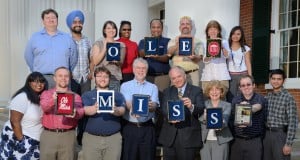 The University of Mississippi has unveiled a new iPad application designed to engage and connect the university community.  Over thirty UM employees have been involved in the project from many different areas including IT, University Communications, Athletics, the Meek School of Journalism and New Media, the Student Media Center, Student Affairs, Alumni Affairs, Human Resources, and the Office of Research and Sponsored Programs. The app was developed in partnership with Mercury Intermedia, the current world leader for mobile news app development.

Included among the various app features are news stories, photo and video galleries, Twitter feeds, announcements, blogs, events, scores, and weather reports. A campus map and directory will be added in several weeks. The app even includes a feed from Rebel Radio, i.e., you can listen to Rebel Radio in real time from your iPad.

To download the Official Ole Miss App – iPad Edition,  go to olemiss.edu/ipad/.  You will also have the opportunity to take a survey for a chance to win one of the ten $100 Apple gift certificates to be given away.  The survey closes at 5:00 PM on Wednesday, May 2, 2012.

Find out more in the press release and blog.